Closing down until next year!

We’ve had no further visits from any swifts and we haven’t seen any near our house recently, so that really is it folks. Such a shame that our swifts didn’t rear any young this year but we shall look forward to their return next year and hopefully they’ll do a bit better. So bye bye until next April-ish and thank you for visiting this blog!

The single bird in Box 1 that we thought had left did in fact return to roost on a couple of odd nights but not on a regular basis. Now it’s the 1st August and last night there were no roosting swifts in Box 3, so we think that they have finally left. We’ll keep the cameras going for another couple of weeks or so yet though just in case we get some last minute prospectors!

The single bird in Box 1 now seems to have left as it’s no longer roosting at night but we still have our pair in Box 3. Yesterday we saw another pair of swifts doing flypasts, obviously having a look at all the boxes and one landed on the entrance to Box 4 but neither entered and they went away again shortly afterwards. Our pair in Box 3 are still flying about with a third bird so whether or not this is the one from Box 1 still hanging about we don’t know. Here are the pair in Box 3, still looking happy enough!

Our swifts are still with us at the time of writing. One of the pair in Box 1 has now left, leaving the remaining one to roost alone each night as usual. But there has been a development in Box 3. After many screaming flypasts over several days, (on one particular day involving up to 12 swifts), our single swift in Box 3 now has a partner - hooray! They seem to have settled down together very well for the last week or so and whilst nothing’s going to happen this year we have hopes that they might both return and get down to breeding next year. Here’s a video of the pair in Box 3.

Well, after replacing the dead camera with a working one we were surprised to find, that evening, that there is still a roosting bird in Box 3. It’s presumably the partner of the dead one and we think it must have been roosting on top of the dead bird. Very sad. It has been there for the last two nights, but I suspect that without a partner and any young to look after it will be away very shortly.
Here's a picture from last night 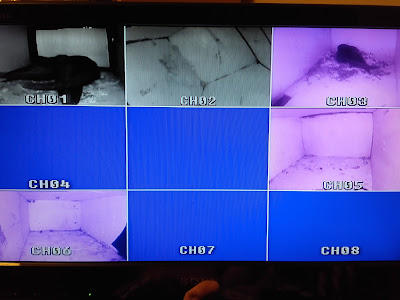 The pair in Box 1 continue to mess about, playing with the nest and sticking down feathers but as usual the eggs are rolling around elsewhere and it seems to be sheer luck if either of the birds happen to actually sit on them at all. Oh well, better luck next year! 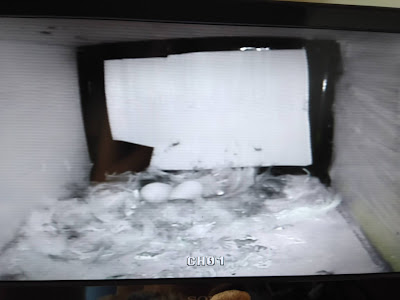 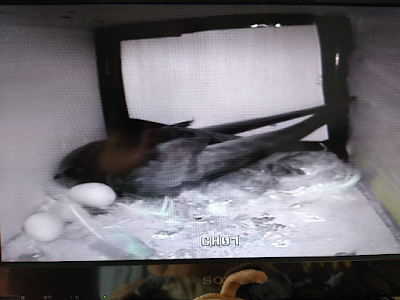 We are waiting for an opportunity to get both eggs back into the nest cup while both birds are out feeding. Box 3 camera is still out of action and we haven’t yet had an opportunity to get another one into the box but we estimate that the young will be around 11 days old by now. It’s just a case of getting in there when both parents are out feeding and replacing the camera. The design of the boxes, with a door at the end of each one which faces the opening upstairs window next to it,  means that we can do it quickly from the window without the need to be scrambling up a ladder.
Posted by Sue G at 09:16 No comments: