This blog chronicles our lengthy attempts to attract swifts (and other birds) to nest at our home. Initially, 10 years ago, we had two Schwegler swift nestboxes installed on the front of our house, along with two Schwegler House Martin nests, and two House Sparrow wooden terraces on the side walls. We then sat back and waited. And waited. With absolutely no interest shown, and despite our having played the recommended swift call CD at full blast all day long for days on end. After several years one of the Schwegler boxes came tumbling down, luckily not hitting anyone; the chipboard fixings had rotted away. Moral of this story, Schwegler boxes are extremely heavy and may be a danger to anyone not wearing a hard hat! Since it had attracted no interest whatsoever, it stayed down, relegated to the garden shed for the time being. Then, one year, we lost the CD so didn’t play it… and that was when some interest was finally shown in the remaining swift nestbox. I wonder if the CD had actually been putting them off all these years. Maybe they thought the nest was already occupied?  Swifts always seemed to be flying around our house, but none had entered our box.

Pan ahead a few years…the remaining box started to look as if it was about to come down at any minute, so we got the ladder out and took it down and spent the winter months replacing the back and the top of it, and fixing it firmly together with rawlplugs drilled into it. At the same time, in anticipation, we bought a nestbox camera and fixed that in too, behind a little plywood screen to hide the cables from any possible residents. In early spring, we fixed it firmly back to replace the other Schwegler box which was now in need of repair, screwed it to the wall and made it completely safe, with the camera cable coming through the bedroom window to our TV. 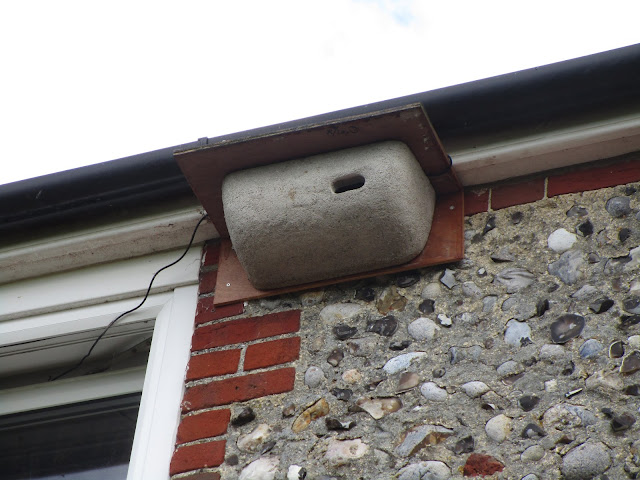 
AND FINALLY, A BREAKTHROUGH! On 25th June 2014, a pair of swifts entered our box and remained in it for half an hour at one point.  And we could see it all on our camera! But it would be a while before we would see them again.

I will now go into ‘diary mode’

We now needed to get some more nestboxes, so we looked on the internet at different plans and then dashed off to the local timber yard and bought an 8 foot by 4 foot sheet of plywood.  Together with other bits of timber lurking in our outhouse (thank you to the dear local builders who allow us to raid their skips!) we managed to build a further five boxes, in a familiar shoebox design and covered with some left-over roofing felt. Four of them had normal front entrances and the fifth, as an experiment to see which they preferred, had a bottom entrance. We now named them boxes 1 to 6, left to right of the house as you look at it. Boxes 1, 4, 5 and 6 are similar plywood boxes with front openings, box 2 is the revamped Schwegler box and box 3 is the bottom entrance plywood box. All have been fitted with cameras, and as they’ll stay up year round have been designed with an end-opening door so that we can get to take the cameras out from our upper windows. The cameras are mounted on 2” squares of plywood that are velcro-ed to the box roof just inside the doors. The only camera we cannot get to without taking the box down is box 2, the Schwegler.

Ours cameras are wired £32.99 https://www.spycameracctv.com/spy/wildlife-cameras/bird-box-cameras/ Slightly more expensive ‘Wireless’ ones are only wireless for the signal, as you have to have a wire for the power to each camera anyway. We’ve got all six cameras wired to a junction box so we can see into all six boxes at once. 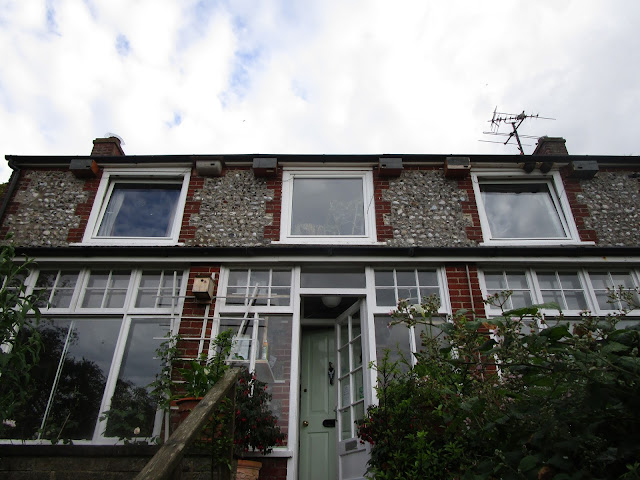 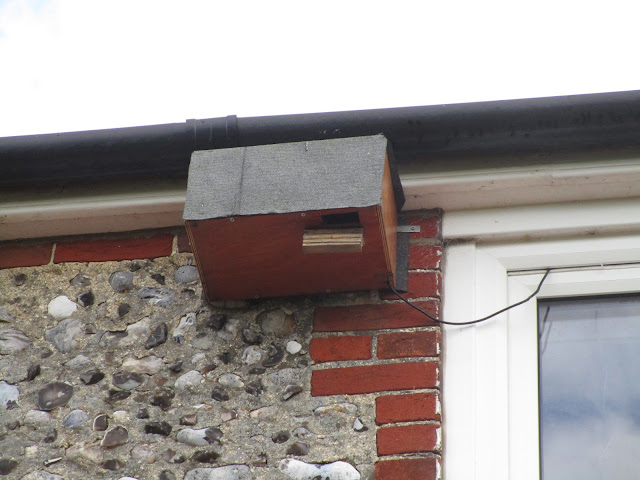 Swift box 3 with it's bottom entrance and landing ramp.

To date, five of the boxes have had interest shown, but not box 3, the bottom entrance. I wondered whether it was all a bit too difficult for the swifts to manage so I have superglued a DIY landing ramp beneath it, which will be screwed on properly in readiness for next year.

27th May 2015     one  roosted in box 2 overnight having made the very beginnings of bringing in some nest material during the day.

28th May 2015     a little more material brought in to the box this morning, so the beginnings of a nest. Two roosted in box 2 overnight (and in the morning stayed intermittently until at least 09.20).

3rd June 2015     just one roosted in the box tonight. The very beginnings of a nest have not been added to at all since the first day it was begun about a week ago.

4th June 2015     only one roosted overnight in box 2 again but two visited the box during the morning and a record six flight checked out the boxes at midday.

19th June 2015     As every recent night, two again roosted overnight in box 2and one present for much of the day, but no sign of any eggs. Have they thrown it/them out or eaten then or hidden and ignoring it/them in the corner?

21st June 2015     The pair  both again roosting in box 2 overnight as usual and an egg has reappeared again - out of the nest and being ignored again after being brooded for a little while late this afternoon.

30th June 2015    Pair both still roosting in box  2  every night but no sign of any eggs for days and nothing in any of the other five boxes except the fledged starling nest remaining in box 4. l’ll clear that out in a day or two. 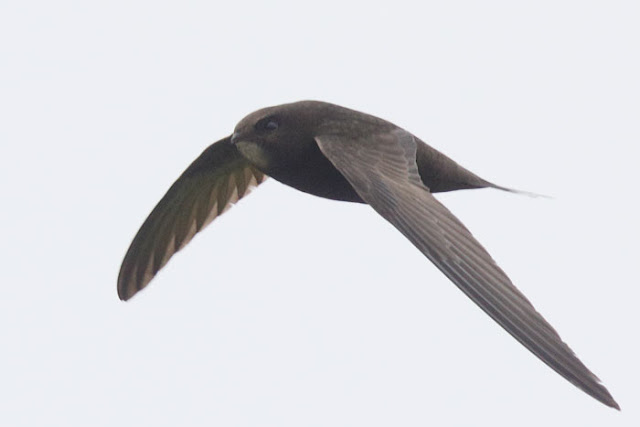 One of 'our' swifts circling the house

2nd August 2015     The pair have roosted in box 2 every night up until last night regardless of the weather, adding to their white feather nest every day. They briefly flew close around the front of the house late morning but they have not returned to roost tonight.

3rd August 2015     Surprisingly after one empty night one swift roosted again in the nestbox last night for the last time.

END OF 2015. So far, only one box, box 2 has any regular swifts go into it. We now have to tape up all the entrances until spring. (The Schwegler box just has a piece of  old sponge rammed into the entrance, attached to a piece of string, which we can pull out in Spring).

We are very much looking forward to seeing if any of our swifts return to the boxes. Sometime during early spring a  House Sparrow has been sussing out box 3,  rather surprisingly, the bottom entrance box before it had the landing ramp superglued on.  It has been gently evicted after starting to bring in nesting material. There’s plenty more room under the eaves with all the other sparrows!

2nd May 2016    Swifts have been seen locally, so we take off the sticky tapes and the sponge out of box 2.
3rd May 2016    A pair of starlings promptly move into box 4 and start nestbuilding…again!

7th May 2016     A bee investigates box 3, which is still full of the ex-sparrow nesting material but doesn’t stay

17th May 2016   Both birds still night roosting in box 2 and one still apparently incubating 24hrs.

15th June 2016     The pair still roosting nightly in box 2 and one on the nest virtually all day on 14th and today, seemingly now incubating two glimpsed probable eggs....

3rd July 2016     Photograph: Our two pairs –  Box 2 pair have hatched their first chick this morning, briefly glimpsed under one of the adults, and appeared to be briefly fed.

10th July 2016   The pair in box 2 both left for 10 mins or so, leaving the now visible two chicks on their own. One of the pair in box 1 brings a feather into box 1, but neither roost this evening.

11th July 2016    A newcomer has finally entered box 3 (the one with the bottom entrance) sometime during the early morning.  I hope the superglued landing ramp lasts the season!  It seems to like the ex-sparrow nesting material and has been re-arranging it. All of the boxes have now been occupied  for a short while at some stage. The pair in box 1 have been out for a long time today, leaving the chicks on their own, but we're not worried, it's raining and it's very warm out too. The chicks are growing well but don’t have their eyes open yet. 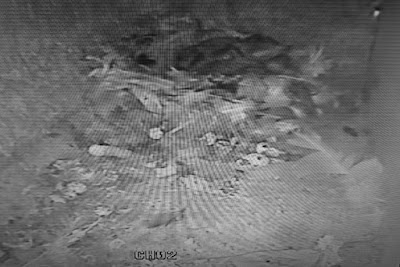