The pair still brooding their young in box 2. Also last night a single swift roosted in box 3, and this morning a single swift entered and left box 5 several times from 8.45am. 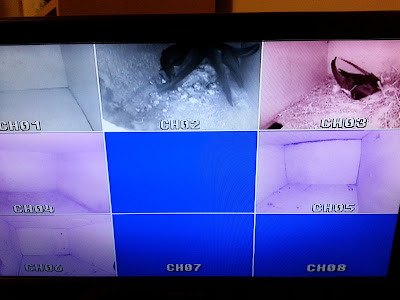 Above: the breeding pair in box 2 and the newcomer in box 3

Notice from the pictures that we have not placed swift nesting cups in the boxes, we figured the swifts could manage to make their own nests. As was proved by the breeding pair in box 2 who have built a rather splendid 'vesuvius' of a nest, so much so that they are starting to disappear off the top of the screen!  Swifts are very loving creatures, they like to cuddle together ... all night long and frequently shuffling about, as can be seen below, our pair in box 2. 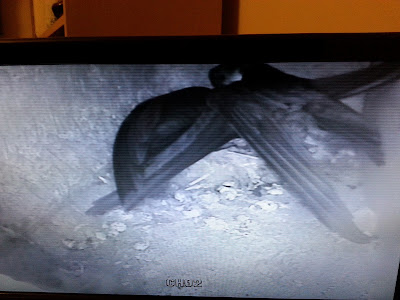 Even when there aren't any young in the nest they still cuddle up together all night, sometimes with one having it's entire wing around the other one. 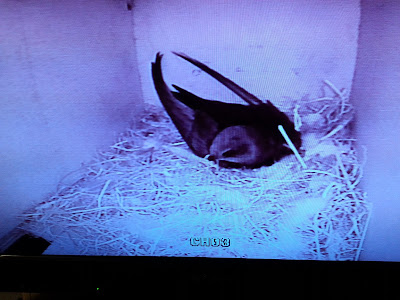 Above: here is the newcomer in box 3 busily re-arranging the ex-sparrow bedding.

Our early morning  and overnight visitors usually turn up again at dusk the following evening, or rather we hope they will. We usually catch a glimpse of one of our breeding pair as they pass the living room window on their way up, followed by a light thud as they land in the box.  Box 1 pair did not return last night, so we wonder if they will tonight - they like to keep us in suspense, but it's great to know that we might have the start of a new colony at last.
Posted by Sue G at 09:32