An intruder in box 3

Yesterday was rainy most of the day so the swifts didn't go out very much. Both pairs were present, those in box 2 and box 3, and the starlings in box 4. I went up to check at 6.30pm to find a fight going on in box 3, obviously an intruder was trying to find shelter for the night. I video-d it until 6.40 when the intruder was finally ejected, but I don't know how long it had been in there before 6.30pm. As you can see, one of the resident pair is on the nest and takes no notice at all until they both get to the back of the box and then they all join in until the intruder makes its escape.


Later on that evening a swift entered box 1 (this is the first time anything has ever been in box 1!) and roosted overnight along with the other two pairs and the starlings. We wonder if it was the one that was ejected from box 3 earlier? 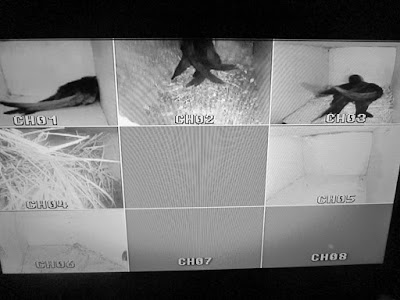