Roosting last night were two in box 1, two in box 3 and none in box 2, although two swifts were briefly in box 2 during the day. Box 3 are still sitting on egg(s). So we still only have two resident pairs so far as opposed to the three we had last year. We decided to move the abandoned egg in box 1 back into the nest whilst they were out, which we had to repeat again later on, and they appeared to be sitting on it last night so we shall see if it ends up in the corner of the box again today!...

An update - box 1 pair have laid another egg and the first egg is still in the nest....you're supposed to actually sit ON it though, not next to it. (It's behind the CH01 lettering...the second egg is underneath the bird) 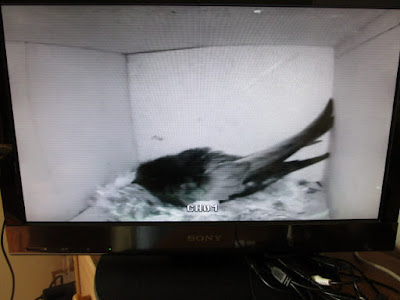 See? Like box 3 does it please! We've still been unable to see how many eggs box 3 have as one of them is always sitting tight like this. 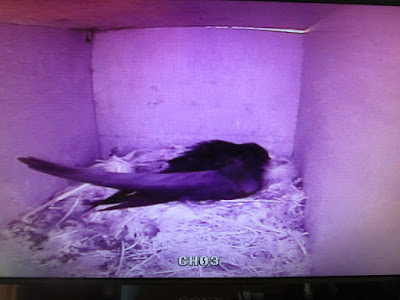