Last night's roost was much the same - it seems we still only have the two pairs, one pair in box 1 and one pair in box 3. Box 3 are sitting on egg(s) but not sure how many as we've only been able to catch a glimpse of one so far, and this afternoon I noticed that box 1 have also laid an egg. But it is in the corner, out of the nest and the parents have been out all day. This suggests that they are new first-time breeders and are behaving much as the pair in that box last year did, so there's not much hope there for this year at least - perhaps they'll get it right next year....below a picture of the lonely egg in the back right hand corner of the box. 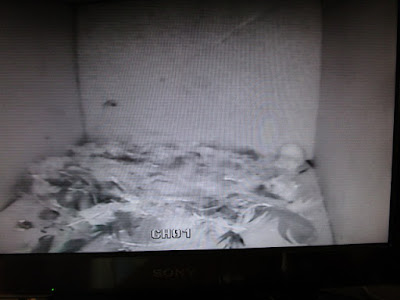