So here we are, another year. There have already been some sightings in the last few days in the UK on the Swift Local Network, so the cameras are back in and ready to go.

During the Autumn we decided to take down the concrete Schwegler swift box 2. It was far too heavy and dangerous, the camera had moved slightly and we were unable to get to it without getting up a ladder and taking it off the wall to make adjustments. Also we might have been able to foster a fallen-out-of-a nest young swift to the pair in that box last year, if it had had an opening door. So it has been replaced with a brand new wooden one, along with box 4 whose door hinges had come unstuck, both made and put up by myself - it's not the easiest thing to try to match up all the screw holes in the  back of the boxes to those already on the wall! Each box has 3 coats of cuprinol and 2 coats of exterior varnish plus roofing felt on the top so I'm hoping they will last a bit longer this time. The entrance holes have been made smaller, to exactly 65mm x 28mm to try to stop the starlings getting in, and they now have a little overhanging 'front porch' which is painted black to mimic an overhanging gutter, and a tiny 'ladder' under the entrance made of matchsticks stuck on with superglue! 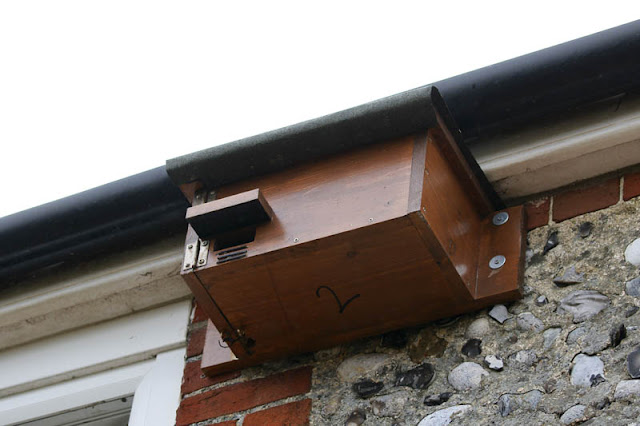 Sponges were placed temporarily in the entrance holes to stop the starlings and sparrows trying to get in but we have just removed them in anticipation of an early arrival! We wonder what the box 2 pair will think of their new home - or will they even take to it at all? We certainly hope so! 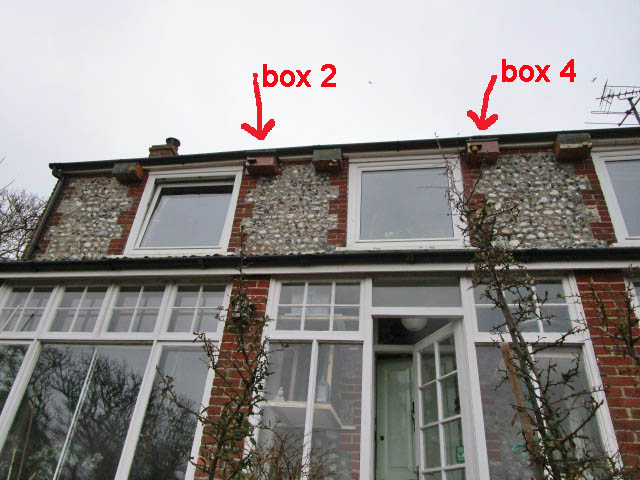