Finally the last of our swiftlets in box 3 fledged yesterday afternoon, after having spent two days in the box all alone without any visits from the parent bird who had apparently left already. We were expecting it to leave yesterday morning (it must have been very hungry and thirsty by this time!) and we were hoping for some leaving shots, spending some time ready with the camera, but after peering out of the entrance hole for almost half the day it returned to the nest for the afternoon. However, some time during late afternoon, probably some time after 4.30 pm whilst we were out, it finally took the plunge and on checking again in the evening (just to make sure it wasn't lurking under the camera as it sometimes did!) we saw that the box was empty. So sadly it's the end of the season for Cley Swifts. Although only four of our six boxes were occupied at any one time, (one of them with Starlings) we did manage to count a total of 11 of our very own resident swifts altogether, that is the three adult pairs plus the two broods of two and three swiftlets. Here's hoping for a better year next year, but we can't complain really as we have managed to raise 5 new swifts this year. Here are some final images of our last swiftlet:

alone on the nest 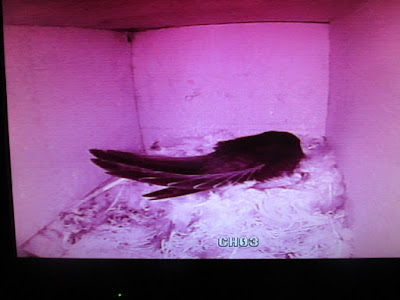 
Cley Swifts will not be updated from now until next Spring, so it's goodbye from me - and goodbye from them! Thank you for visiting and keeping up with our swifts and look out for us again towards the end of April next year.
Posted by Sue G at 03:57