I noticed today that there were some prospectors doing a few fly pasts and also landing briefly. They seemed to be most interested in box 2, which of course is already occupied by the pair and three chicks. The adults were out at the time, but the prospectors didn't enter the box. Rather, they seemed more interested in the upper back of the box, just underneath the gutter. This is rather annoying, since boxes 4, 5 and 6 are empty and just waiting for somebody to move in! It occurred to me that maybe next year I should put false gutters on the fronts of boxes 4, 5 and 6, just above the entrance holes, if that's what they seem to like. Obviously I can't be up a ladder right now doing it, as the swifts are coming and going a lot of the time, so that'll be a job for the winter. However, it then occurred to me that maybe there was something else I could do, (other than a large white arrow saying 'This Way Please') to draw their attention to the vacant boxes....enter 'Decoy Swift': 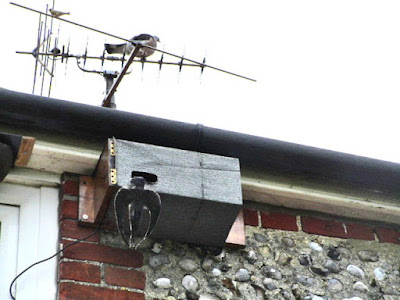 Made from a piece of cardboard cut out (to a rather large, admittedly),  swift shape, painted black and with wire 'feet' on it's head to hook on to the entrance hole, this will remain for a couple of hours each afternoon and be removed before dusk, just to draw the prospector's attention to the box. I don't know if this will have any effect at all but it's an interesting experiment...watch this space!
Posted by Sue G at 07:02