Last night we had two birds roosting in box 1, one in box 2 and two in box 3. Still waiting for box 2 to find it's partner, we wonder if it's still on it's way or if it's been lost? Having been away in Scotland for the past couple of weeks, what has been startlingly noticable is the vast number of insects up there as compared to Norfolk and the rest of the south of England. Our vehicle was absolutely covered in insects before we left Scotland, something that we have not seen down here for years now, so food shortage must surely be one factor at least in the general decline of the swift population down here. Obviously the current fog today on the coast is not helping either, although our own swifts are managing to get out and about still. Here's hoping things pick up soon. Here is an image of one of the pair in box 3 this morning, which looks as though it could be sitting on eggs - hopefully we can confirm this shortly. 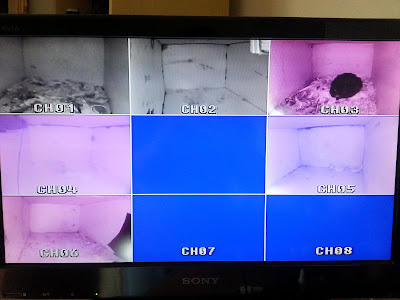