After box 3 abandoning the two eggs the other day, they have now both disappeared from the nest. They could be lurking under the camera, or maybe they have been tossed out but we couldn't see any sign of them on the ground or in the gutter below the box. But the good news today is that box 3 seems to have found a new partner, so we hope they will settle down together, although it's probably too late for a new clutch of eggs. But hopefully they'll both return next year to breed.

We have also seen that there are actually four baby starlings in box 4, but one is usually hidden from view most of the time. They are doing well and growing fast.

Baby starlings in box 4 and two swifts in box 3: 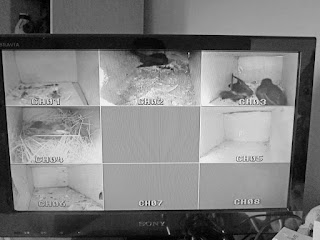 video of the baby starlings:

Box 2 are still incubating their three eggs, and box 1 are spending most of the day out and just coming in to roost, as is the single starling in box 6.